Winning over the opposition

Our challenge in Bolton was how to update the large Victorian open-plan Market Hall; a revitalisation that was needed to drive Bolton’s future as a regional shopping centre.

The Grade II listed building is an exhilarating example of a purpose-built retail environment from the early 19th century, defined by the light and airy quality of the spaces, its high glazed roofs and wide spans.  However, successive alterations had led to a poor internal environment, blanked-out street facades, with falling footfall and failing viability.

Our proposals transformed the layout and servicing to accommodate modern retail units, slotted into the historic structure, and restored the facade and roofs, while maintaining the special quality of the interior.

A major aspect of the project was engaging constructively with members of the local community, many of whom were against the scheme, the Council, and the key heritage stakeholders, listening carefully to their concerns and responding to them.

‘We are delighted to have attracted such a high calibre of retailers to Bolton through the restoration of the Market Hall. The new space will provide another major attraction to the town, allowing us to operate on two levels; maximising the space available and offering more shops to the people of Bolton. At the same time, people will still be able to see and enjoy the stunning architecture of the old Market Hall, combining traditional with modern, side-by-side.’Councillor John Byrne, Bolton Council’s Executive Member for Development 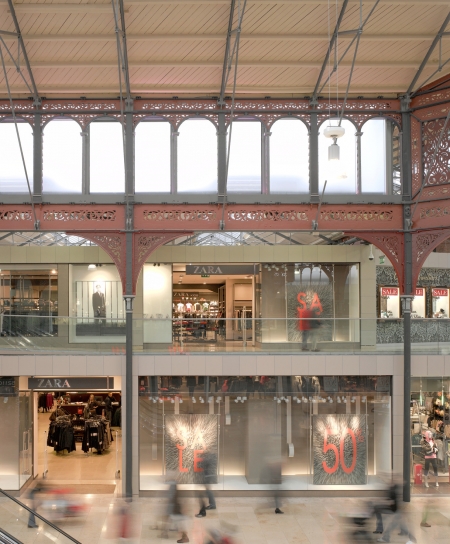 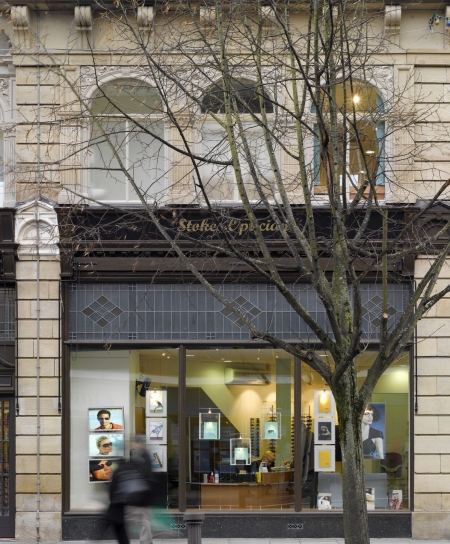 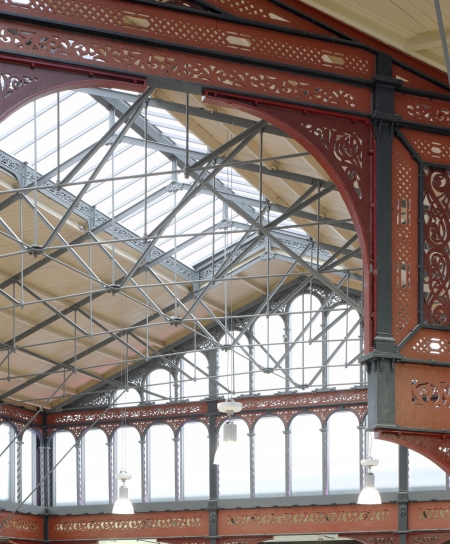 When Warner Estate purchased Market Place, the Market Hall was having a negative impact on the adjacent shopping centre and the surrounding streets; it was an underperforming asset for the Council (the freeholder). Sensitive adaptation, including retail units for high street retailers (which the Victorian buildings in the rest of the town centre could not readily accommodate), was needed to provide a viable future, and to help Bolton compete with Manchester’s major shopping centres.

Designed by GT Robinson in 1855, Bolton Market Hall was then the largest covered market in the country. It was redeveloped at the end of the 19th century and again in the 1930s. In the 1980s Chapman Taylor designed a large shopping mall (Market Place) to the north, incorporating the Hall and adding small kiosk shops within it.

The motivation for the project was both commercial and regenerative, with the restored facades intended to enhance the experience of the town centre. Chapman Taylor, acting as client advisor to Warner Estate, got us involved in the limited competition in 2003, which we won.

Throughout the project we were involved in briefings, discussions and debate with tenants, council members and conservation officers, in tandem with our client and their retail team. This gave the Council a proper appreciation of what the challenges were and the knowledge and context to be able to oppose the populist view not to do anything. 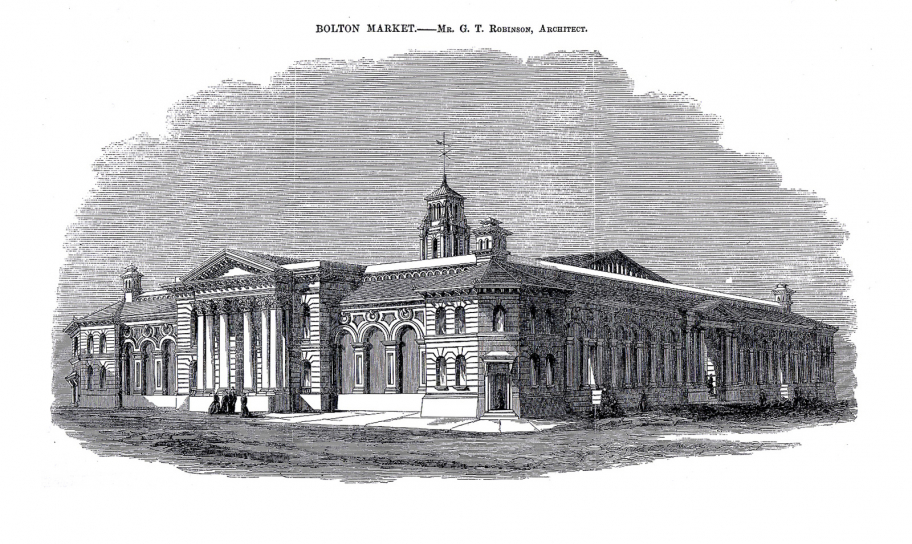 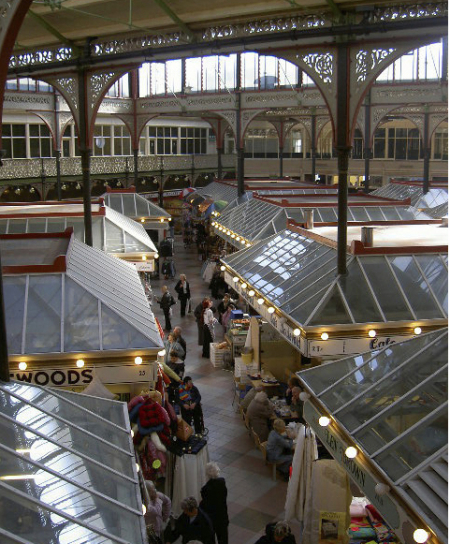 We used historic research to show that the hall had been altered each time shopping changed, analysis of its significance both locally and nationally, and digital modelling to show the impact of the new structures on the character of the interiors and the facades. This allowed us to persuade English Heritage and the conservation officer that our proposal was both right for the short-to-medium term future of the market hall and central Bolton, but that it could be reversible in the longer-term if necessary. 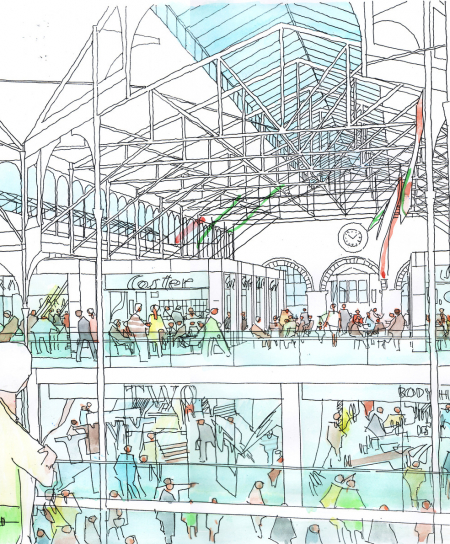 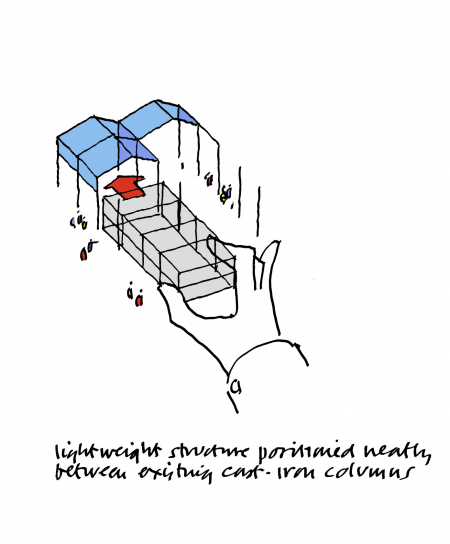 In design terms, our lucky break was the discovery that the original cast iron frame suited a ‘normal’ shop unit width of 7m. This allowed us to slot units between the column and the whole two storey unit is completely independent of the cast iron, sitting on the existing vaults. We used 3D modelling to test and develop the design so we could understand its impact on the character of the hall, including views of the roof.

Our design makes the most of the filigree cast iron roof structure and the top light that pours in. New retail units were slotted in between the original columns and facing into the hall. This allowed the little façade shops to face outwards once more, into the streets and contribute to the public realm. New servicing routes have been created, using the existing basement and the adjacent delivery bays of the shopping centre. Minimal interventions were made to the exterior to highlight and improve the points of entry and the whole external envelope was fully restored. 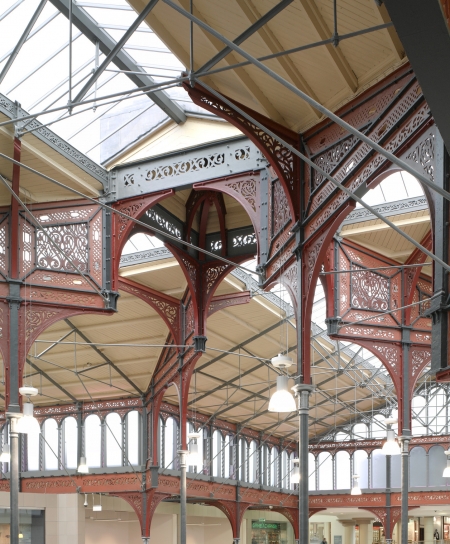 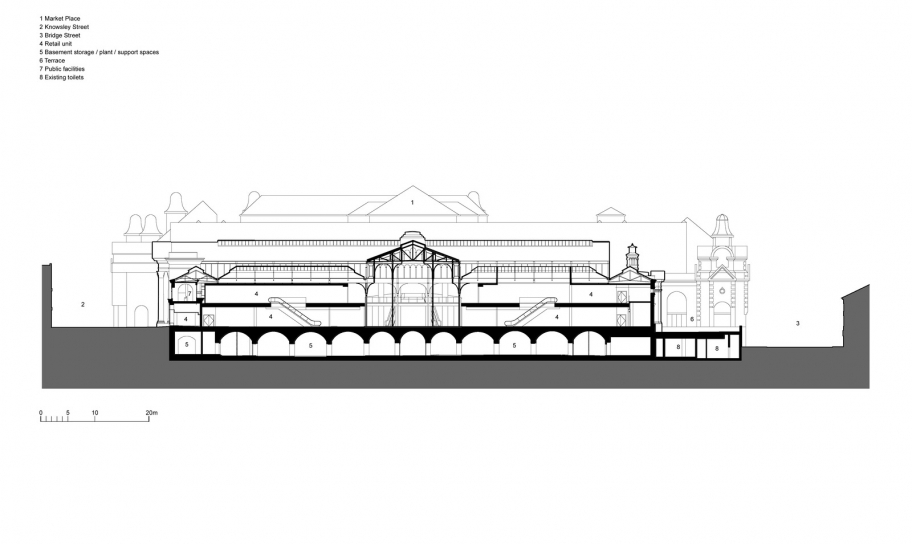 Particular care was taken to make the new interventions reversible wherever possible and to develop servicing, fire, mechanical and electrical strategies that respected the significance of the historic fabric. Careful collaboration with the services engineers, WSP, avoided any new penetrations in the historic roof, and use of a centralised heating/cooling loop and a seasonal heat store, led to it to have a lower energy use than a typical new shopping mall.

We successfully obtained planning permission and listed building consent, and produced the Employer’s Requirements (Stage E). The works were procured using design and build contract, and we were retained by the client to monitor the work of both Chapman Taylor (Contractor’s Architect) and the subcontractors throughout production and construction. Working with the client’s agents we created the Tenant Design Guide and obtained listed building consent for all the tenants’ shopfront signage on their behalf. 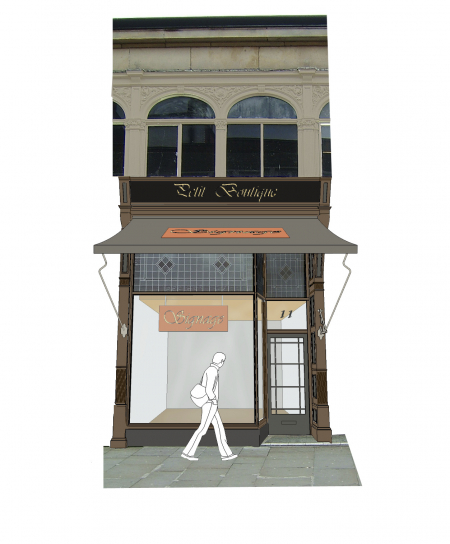 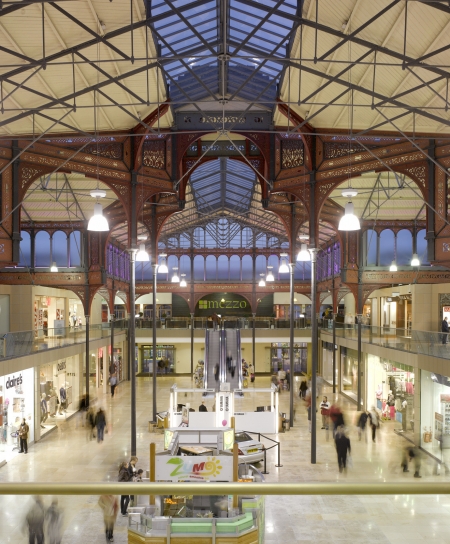 We brought our understanding of the heritage issues and how to engage with varied stakeholders, and learnt from the expertise of many other professionals who had experience in the retail sector; and delivered an exemplary scheme – used by English Heritage as a case study in The Changing Face of the High Street: Decline and Revival A review of retail and town centre issues in historic areas

We successfully obtained planning permission and listed building consent, and produced the Employer’s Requirements as tender packages (Stage E). The works were procured using design and build contract, and we were retained by the client to monitor the work of both Chapman Taylor (Contractor’s Architect) and the subcontractors throughout production and construction. 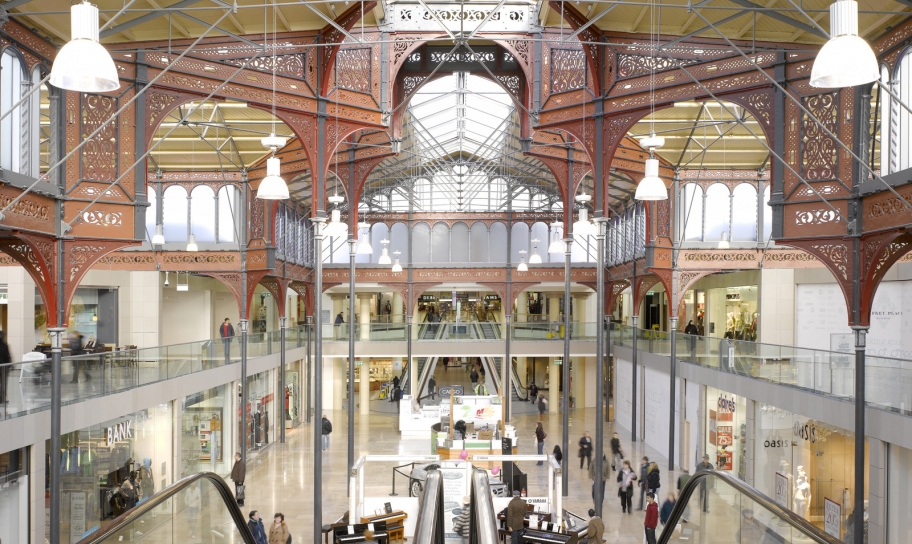 The project provides Bolton town centre with the retail anchor it so desperately needed, makes a positive contribution to the surrounding streets, and secures the future of one of Bolton’s most important buildings.

This is a fine example of a Victorian Market Hall that has now been given a new lease of life through the stunning restoration project.  This is one of many regeneration initiatives ongoing across Bolton as part of a long-term plan that will attract more than £1 billion in new investment and create almost 20,000 jobs in key growth sectors.

Shoppers have commented how much they like the new centre and the youngsters especially like having their favourite brands here in Bolton so they don’t have to shop in other towns and bigger centres. 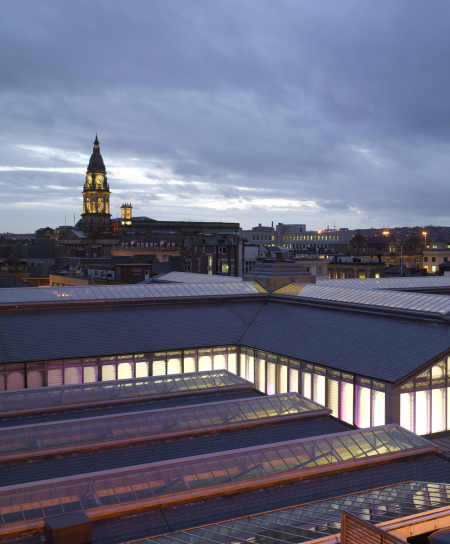