The Leicester Cathedral Revealed project aims to complete the reordering masterplan that we started considering in 2008. The first phase of the internal works to the Grade II* listed cathedral was successfully completed in March 2015, and included works to the chancel and sanctuary to create a resting place for Richard III’s remains. The completion of the reordering will transform the building, enhancing the Cathedral’s mission, and allowing it to offer a warm welcome to everybody who visits.

The project includes reordering of the main cathedral spaces, the complete renewal of building services, and provides the new ‘Heritage Learning Centre’ (HLC). This extension to the cathedral will be spread over 4 floors – Basement -1 and -2, Ground and First – with facilities for orientation, education, and hospitality, and provides the toilets, back-of-house spaces and storage areas that the cathedral lacks.

Projects of this scale on historic sites take very significant numbers of partners and much germination time.  Then a pandemic adds more uncertainty.  So, it is amazing that all has come together in this past year to allow us to start these works that will repair and equip Leicester Cathedral for the next century. 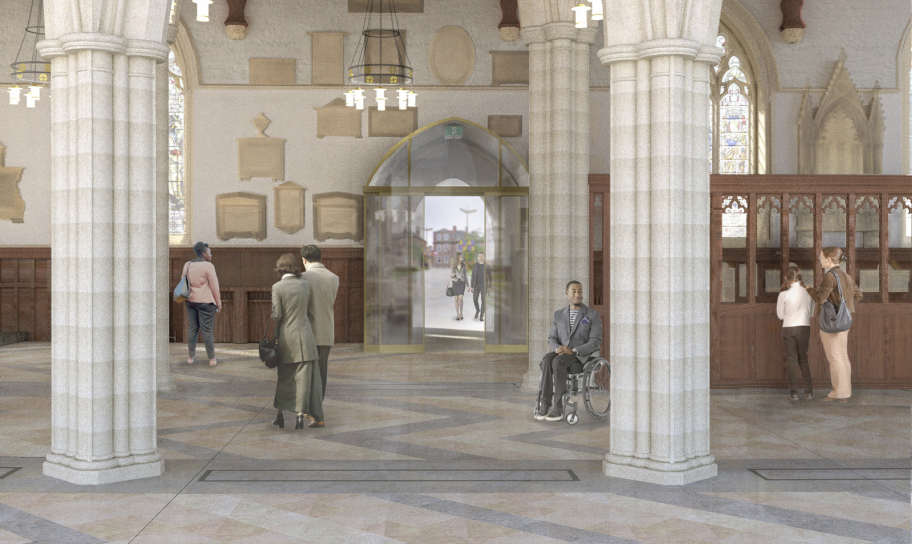 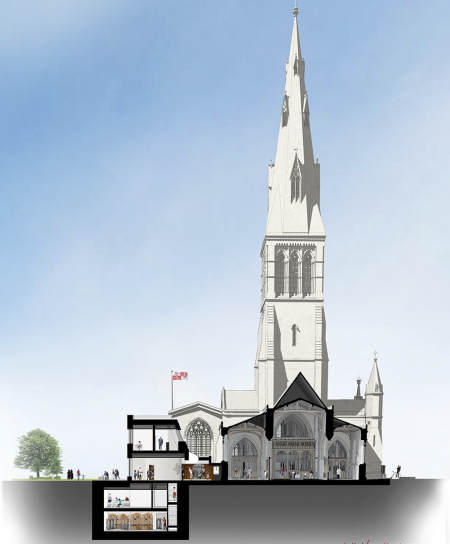 In 2008 we responded to an advertisement seeking an architect for the reordering of the cathedral and its precinct, issued by the then Dean, Viv Faull. Our interview pitch was predicated on treating the reordering as a masterplan, i.e. as a framework for future development, rather than a set of fixed proposals, as timescales and funding opportunities were bound to change. We believe this approach won us the commission, despite never having worked for a Cathedral previously.

Our reordering masterplan identified the key functional and liturgical shortcomings of the cathedral and its grounds, and various opportunities. We suggested several key moves, including moving the altar, uniting the divided space of the churchyard and the former school playground, and creating a new building on the site of the Old Song School to provide better support facilities.

The first expression of its recommendations was the creation of Cathedral Gardens, designed by Gillespies landscape architects. This was well underway when, in 2013, a quixotic exploration of the nearby car park delivered the biggest archaeological find of recent years.

The positive identification of Richard III’s remains presented a huge opportunity for the Dean and Chapter to proceed with some aspects of reordering. The timescale was hugely challenging, with a defined and short period to the reinterral. This unprecedented situation demonstrated the value of the masterplan approach, as we were quickly able to show how a suitable memorial could be incorporated, and how those works could be designed to form the first part of the reordering, and achieve two key liturgical objectives: moving the high altar to the heart of the church, under the crossing, bringing celebrant and congregation together, and creating a highly visible cathedra. 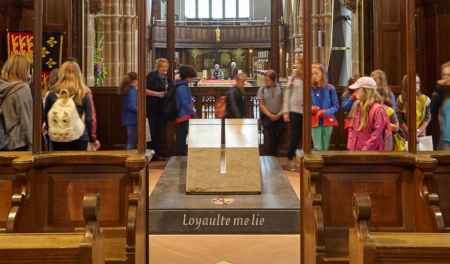 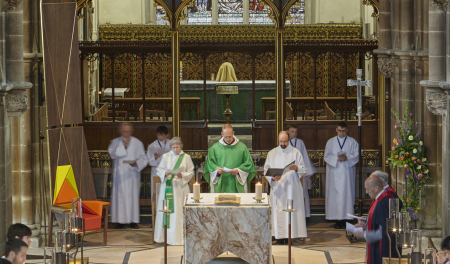 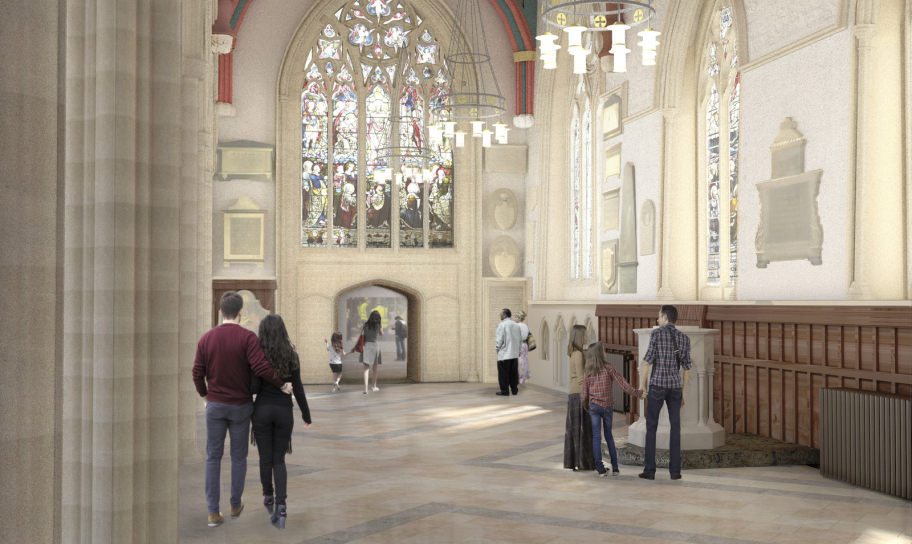 As developed, the project will relocate the font to a liturgically sensible position in the Great South Aisle, and will replace the floor to remove the various stepped changes of level and incorporate service routes, insulation and underfloor heating.

It completely replaces the building’s lighting, electrics and heating, essential given their age, improving comfort and reducing the Cathedral’s energy use and carbon footprint. Good visitor and back-of-house facilities are accommodated in a new extension, called the Heritage Learning Centre (HLC).

Our masterplan had identified the former Old Song School as the only potential site for development, and the need for a multi-storey building there to deliver the quantum of space needed on its limited footprint. Developing the brief with the Cathedral community led to the priorities being carefully weighed up and prioritised: the brief agreed asks for an education centre, exhibition spaces, vergers’ and volunteers’ facilities, visitor’s toilets and baby change, and storage. 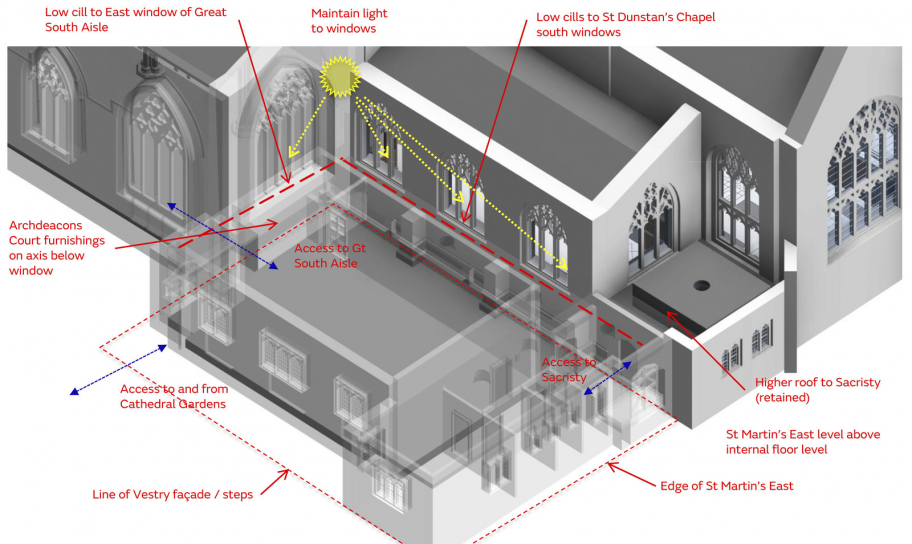 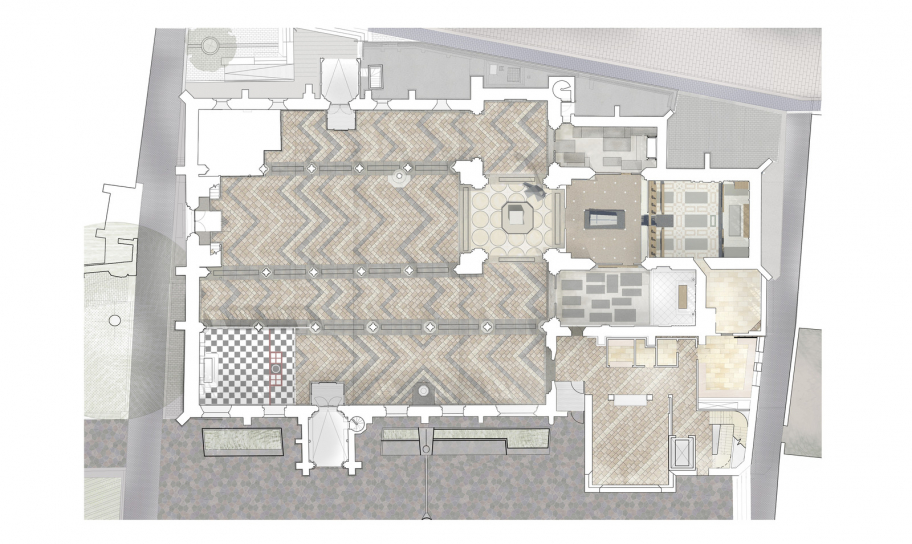 The HLC is therefore iceberg-like, with two above-ground and two below-ground floors, offset in section, worked through with our engineers, Price and Myers, and the cathedral archaeologist, Philip Dixon, to negotiate the constraints of the medieval foundations and older archaeological strata below ground.

The design of the visible building creates a distinctive, contemporary presence that sits comfortably with the historic elevations of the cathedral and the setting of Cathedral Gardens, but has its own identity. 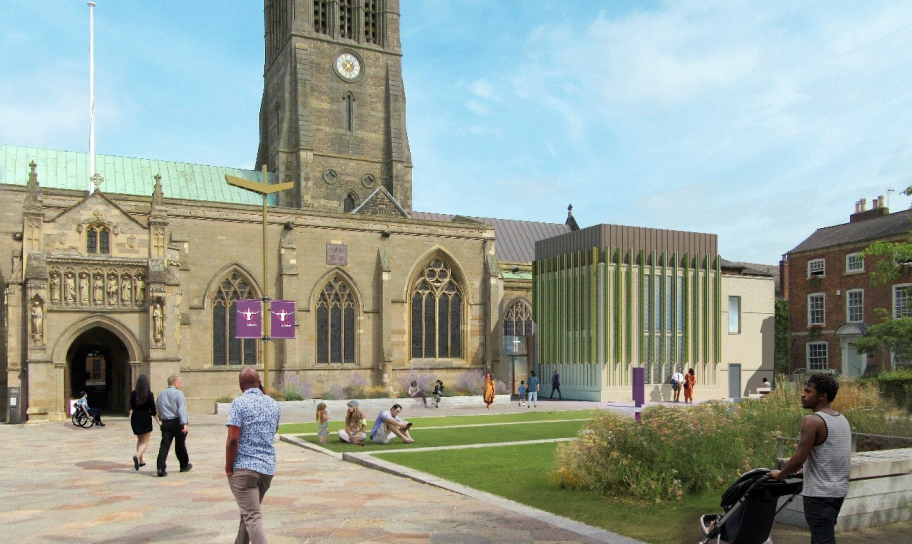 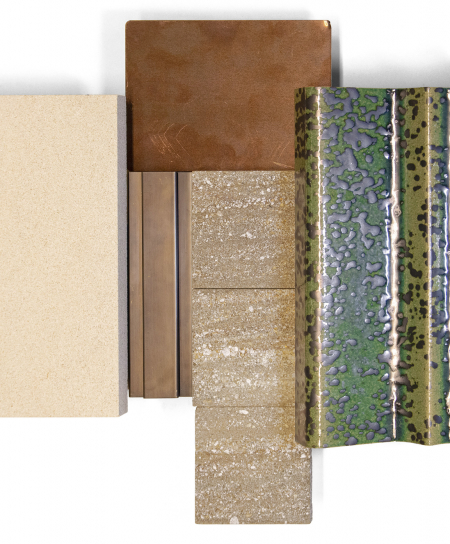 Although its form is slightly pulled away from the historic building, its elevations are of buff sandstone, similar to that used in the late C19 spire and northern transept, with its copper-clad parapet reflecting the visible roof slopes of the old building. The fine vertical fins that punctuate its main façades are made of glazed faience, and provide decorative detail that enriches the elevations and distinguishes the primary public spaces inside. 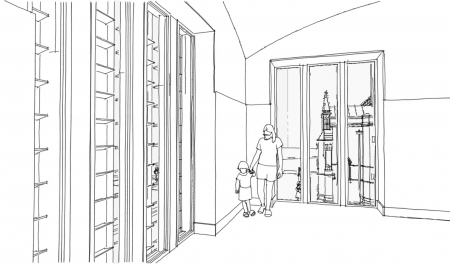 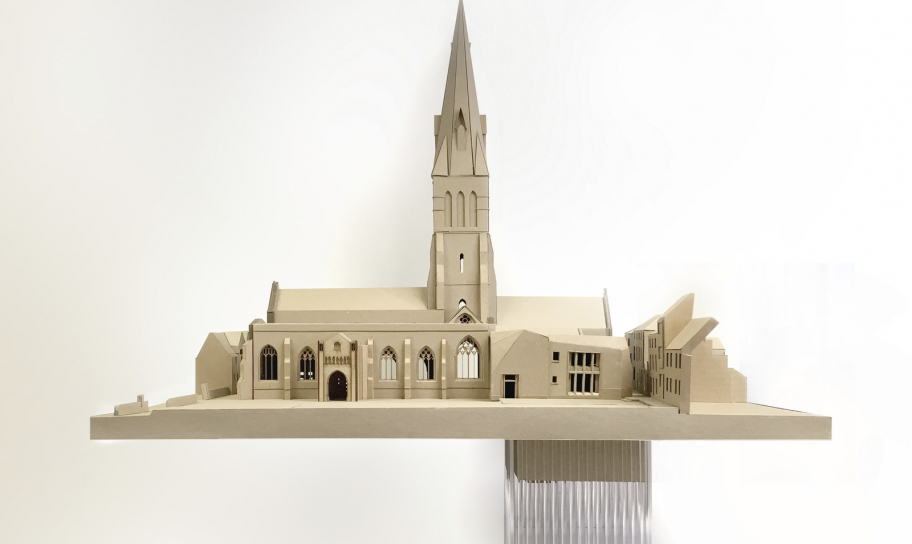 The project required the approval of the Cathedral’s Fabric Advisory Committee, the Cathedrals Fabric Commission for England (the Church of England’s national statutory body), and Leicester City Council (the local planning authority). Given the different views of these bodies, and the proposals’ inevitable contentiousness with several of the statutory consultees, this was a considerable challenge.

Working closely with the Cathedral, we achieved all the necessary consents after a long and patient process of engagement and design review, involving all the statutory bodies and their consultees. 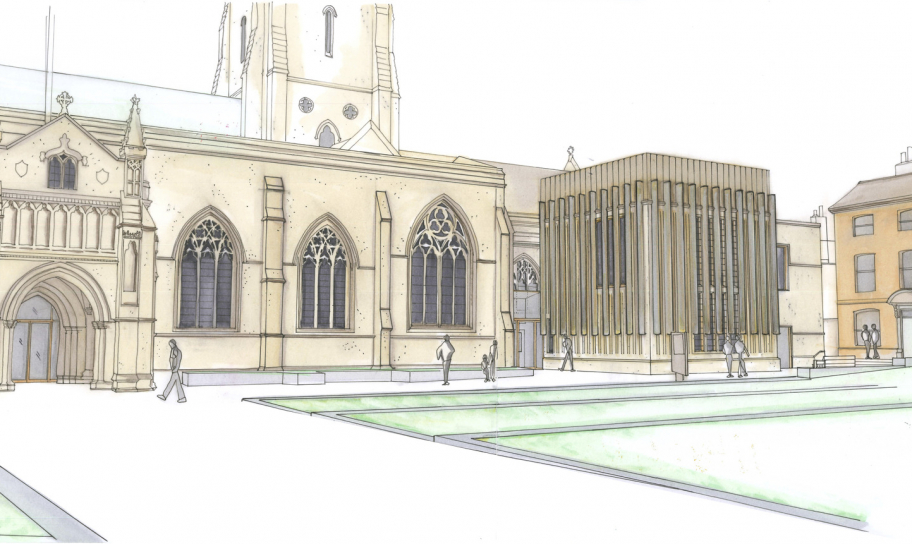 We have done this by improving the historic fabric of the cathedral where possible, and adopting a passivhaus approach for the HLC, working with Etude and Martin Thomas Associates. This minimises energy use by creating a highly performing building envelope, and using mechanical ventilation with heat recovery. Given the form factor of the building, which is constrained by its location and the interfaces with the historic building, the HLC will not quite achieve the passivhaus standard but will get close to it, and it will be a pioneering building for the heritage sector.

The project is extremely complex, and our journey with the Cathedral has involved numerous challenges – some of which have had the potential to stop the project. So we are hugely thankful for the patient determination of Dean and Chapter, and the generosity of all the funders, led by the National Lottery Heritage Fund, and pleased that the Cathedral has reached the point that construction is underway.

The works will be inevitably disruptive to the life of the cathedral community but when complete it will have a transformative effect on the welcome that the Cathedral can give to all its visitors, and the experience of everyone using the building. The works will restore the fabric of the cathedral, make it easier to appreciate its heritage, minimise its carbon footprint, and equip the Cathedral to serve City and County for future generations.