Forming connections on a tight site

Despite our long association with Latymer we had to compete for this project. We demonstrated that the school could get a new building of the size required without demolishing the existing facilities, so there was no need for costly temporary science accommodation during construction. The new building forms the eastern boundary of the square at the heart of our master plan and provides a significant new landmark for the school. The library, on the ground floor, has full-height glazing connecting it to the square. The entrance to the building is alongside the Lower School; the two buildings are connected via links at upper and ground levels. The laboratories, arranged around a central atrium, are designed to be as flexible as possible, and all are naturally ventilated. 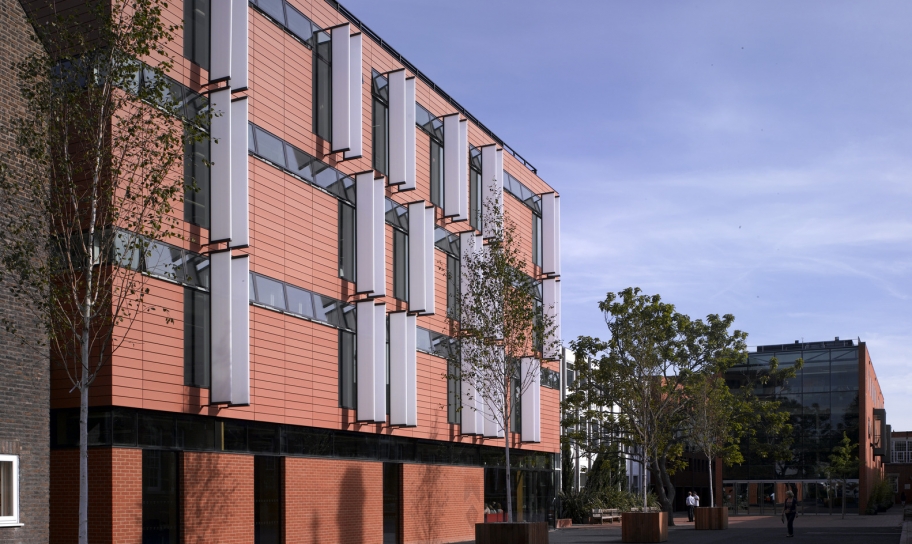 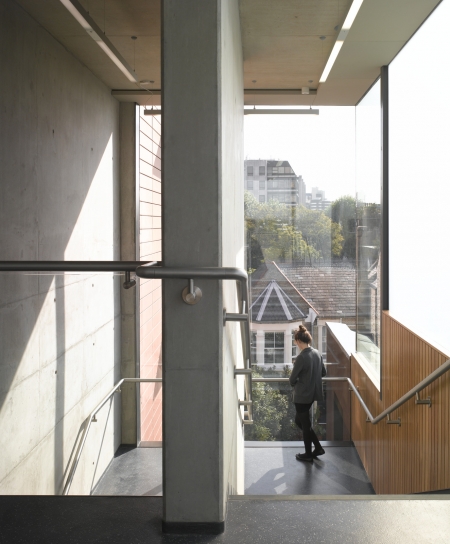 This new facility for Latymer Upper School is one of a series of buildings by vHH for the school. The scale of the buildings on Rivercourt Road, from the Great West Road northwards towards King Street, rises gradually. This site is opposite the tallest building on the street, the Rivercourt Road Methodist Church, (18m to the ridge line). The new building is of a scale and language that responds to these larger buildings, relating to the buildings on King Street while creating a significant new landmark for the school. It forms the eastern boundary of the enlarged central square which has the new music school to the south, and the main building to the east. Most importantly it allowed the school to build a four-storey building in a single phase, thus causing minimal disruption to the running.

The west and east facades of the teaching accommodation are  heavily glazed to maximize daylight and provide visual links with Rivercourt Road, to the east, and the school, to the west. The fenestration on the south and north facades, which are close to neighbouring buildings, is high level only. 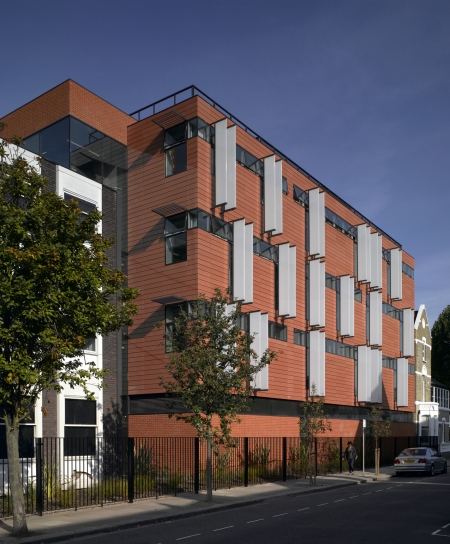 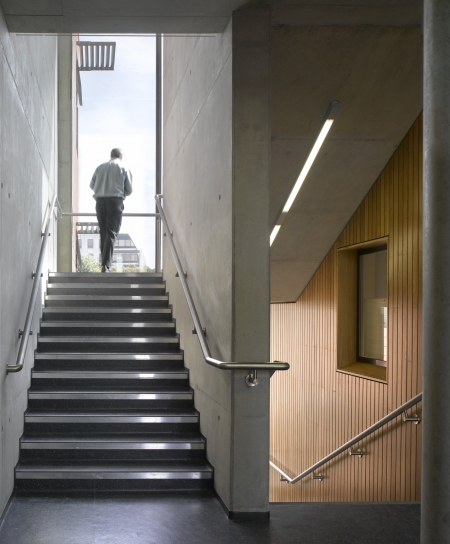 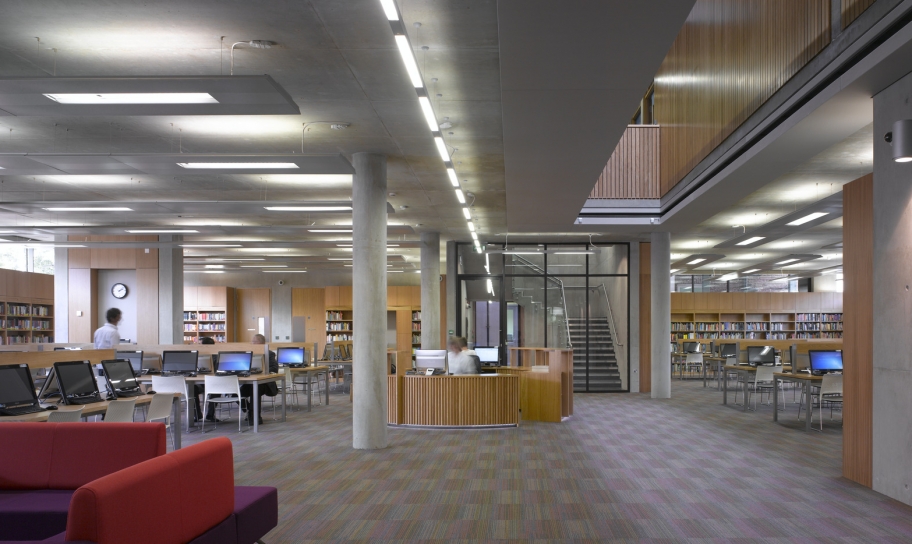 The library occupies the ground floor of the new building. Full height glazing at ground level helps to connect it with the central square. The library has generous floor to ceiling heights and a light-well at the centre of the plan, all of which maximizes day light. It links with the new ICT department on the ground floor of the Lower School, providing a flexible space in which the children can respond to continuing developments in information technology. A separate teaching space, a glazed enclosure, is located within the library to provide a facility for group teaching without disturbance to the other students. This space is naturally ventilated via the stair tower to the north of the building, which acts as a thermal chimney to extract the hot air.

The entrance to the science building is off the central square, alongside the Lower School. The relationship between these two buildings is enhanced by connections between the departments in the new building and those in the Lower School via glazed links at upper and ground floor levels. 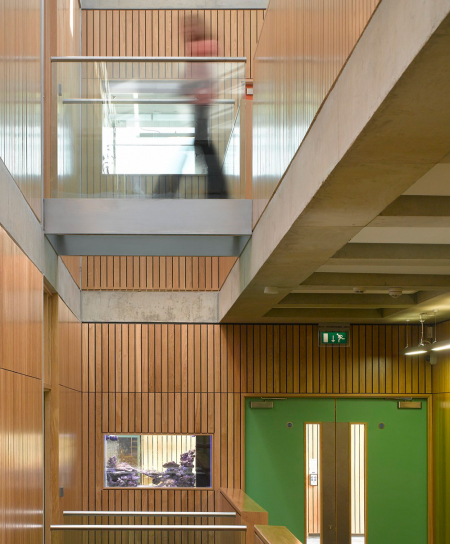 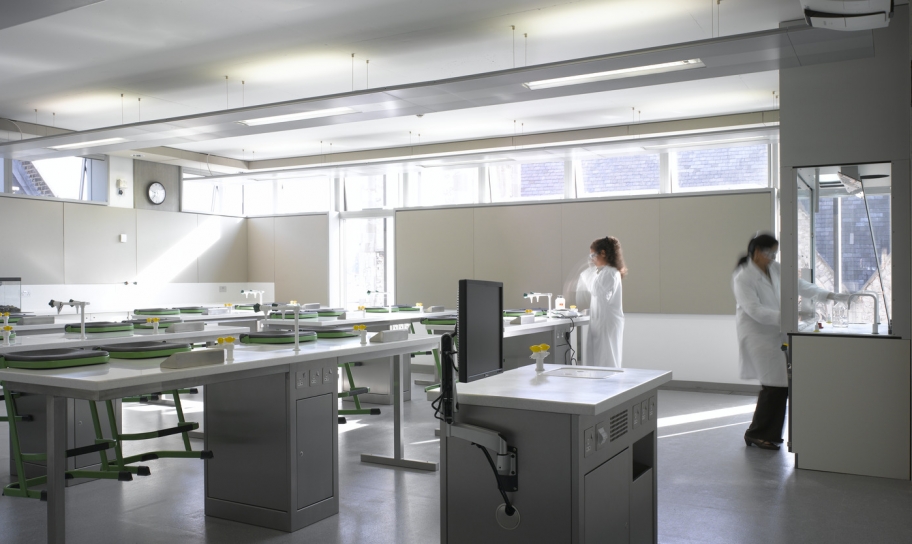 The laboratories are designed to be as flexible as possible, and all are naturally ventilated. They are arranged around a central atrium space which acts as a circulation space. This central space also provides a source of light for the labs, via the clerestory windows. Each floor has one central preparation room, and the labs are serviced via a series of connecting perimeter doors so that technicians do not have to cross the central area during cross over periods.